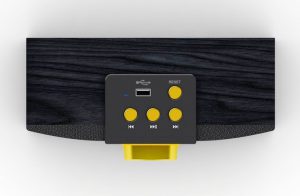 The Sovereign USB Memory Stick Player has been designed by Kings Audio specifically for use by visually impaired persons. It is very easy to use and produces superb sound reproduction.

The Sovereign has proved so popular amongst our visually impaired customers that the last two batches had sold out even before they had arrived!

The Sovereign USB Memory Stick Player now has the capacity to bookmark multiple USB memory sticks, so if you have a talking book, talking newspaper or a magazine all on the go at the same time, the Sovereign player can bookmark each stick with a tap of the play/pause button, allowing you to go back at any time and listen from where you last left off.

Also, the Sovereign MP3/WAV Player has a redesigned battery compartment that now takes a standard Lithium Ion battery (Nokia Style) which clips in easily. These batteries are widely available in the UK from shops and online.

Connecting to the Sovereign via Bluetooth does not require any buttons to be pressed on the Sovereign. Simply search for and select the Sovereign which will appear as “Bluetooth Speaker” on your Bluetooth device (Phone, Tablet etc.) to connect…. you will hear a tone through the player (if switched on) when the connection has been made. Bluetooth is not useable when a USB stick is inserted.

Tactile markers to help you identify the different controls

Pinpoint multiple ‘Bookmark’ memory – remembers last known track position, mid-track, even when speaker is switched off or stick is removed and other sticks are played before the original one is re-inserted

Headphone Socket easily accessible on the front of the player

There are no reviews yet.